A Loving Retrospective on Charles, the Visionary Who Made This Happen

It’s coming up soon — White Snake Projects will be five years old in September. Neither Charles (husband, artistic partner, visionary, daredevil, risk taker, raconteur, impresario — you get the picture . . .) nor I ever dreamed that WSP would become an activist opera company, much less have a fifth birthday. Don’t get me wrong — we were always dreamers, Charles and I. Our motto was (and still is) dream big, dream often, dream hard! 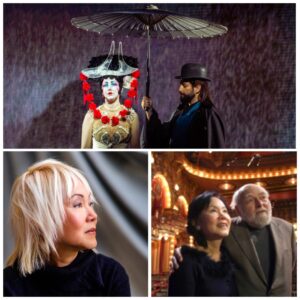 Charles died in 2010, after the world premiere of Madame White Snake by Opera Boston. He did not live to see it win the 2011 Pulitzer Prize for composer Zhou Long. But in his usual infallible, prescient (and somewhat irritating) way, he predicted it would happen.

I withdrew into my shell after Charles died. I stopped working, writing, basically, stopped living. This sounds so cliched, but anyone who has ever lost a soulmate knows exactly what I’m talking about. I was afraid that I did not have the strength to do this on my own. It’s not the hard work or long hours; I love to work. It’s the naked vulnerability that makers of new things feel as we unveil our innermost selves and bear the world’s judgment, sometimes valid, and sometimes not. It’s enduring self-doubt and crises of confidence without a partner who sees the vision and never loses the way. After three years, with the help of Beth Morrison, I started again. Perhaps it was Charles nagging me to stop using him as a crutch, telling me that I needed to finish the Ouroboros Trilogy, to get Naga and Gilgamesh produced. So, I did. Beth Morrison Projects and WSP premiered the Trilogy in 2016 as an all-day event just as Charles and I envisioned it. That’s what happens when we dream hard.

I didn’t realize just how hard it really was until I decided to continue making new opera after the Trilogy premiered, how lonely and uncertain the way forward was (and continues to be.) What I realize now is that everything worthwhile is hard; that White Snake Projects is forging a new kind of opera, that we’re bringing two contrary concepts — opera and activism — together. And that it is worth spending the last one-third of my life doing it.

I’m going to be writing each week about how White Snake Projects, first groping in the dark, then with more surefootedness, found our groove as the company you know now, one that embraces difficult social issues and makes beauty from what can be really ugly.

Please stay with me as we take a look back together, even as we journey forth into the unknown.

Be safe, be well, be inspired,