PermaDeath: What Does it Mean to Die Permanently?

It troubled me that my son came to White Snake Projects’ productions reluctantly from obligation. I asked him one day, “What would it take for you and your friends to really want to come see opera?” He replied, “If the experience could be like the opera scene in the Fifth Element.” For those of you who are unfamiliar with this scene (“Diva Dance”), it’s a tour de force of musical virtuosity and visual effects featuring a processed coloratura voice and a blue singer with squid-like tentacles sprouting from her head. 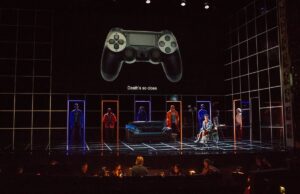 At this time Pete Frates (founder of the  Ice Bucket Challenge), a young Boston athlete, had just been diagnosed with ALS. In Pete’s words, “What if you woke up today and someone told you that you have two to five years to live? . . . What if they also told you that . . . you would lose control of all your extremities and your ability to speak, eat and breathe? . . . But don’t worry, your mind will be totally intact to enjoy the entire progression – or regression.”

It was heartbreaking to follow Pete’s fight against this pernicious disease. I decided to make an opera about living with ALS to help raise awareness, partnering with Compassionate Care ALS, a remarkable support organization for patients and their families. It  seemed to me that the concept of “avatar” in video games was the ideal vehicle to explore the mind/body duality – in ALS, the body dies, leaving the mind imprisoned in it. (Interestingly, “avatar” is a Sanskrit term meaning “a manifestation of a deity or released soul in bodily form on earth.”) It was the perfect confluence of storytelling, technology, and activism where each of these three elements are interdependent on the other to create a total work of art. Thus began a proactive move towards a creation process that is now a hallmark of how we make opera: Partnering with advocacy groups; involving young adults; telling original stories and inventing new technology. 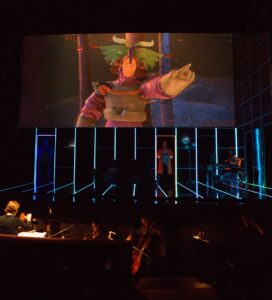 The protagonist is a video game champion diagnosed with ALS. The disease has progressed so she now uses a wheelchair. Opera has not put a protagonist in a wheelchair front and center before. This is when we encountered the first of many difficult decisions as an activist company – how to cast appropriately. It was (and probably still is) impossible to find a singer who uses a wheelchair for the role. We agonized over this before deciding to use an able bodied singer who was directed by an ALS expert on how to portray an ALS patient in a wheelchair. 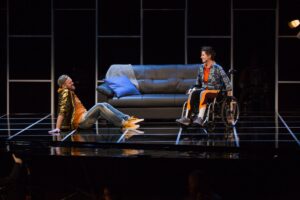 Composer Dan Visconti wrote an amazing score, incorporating the sound world of video games. Our intrepid tech team struggled with developing the new technology – 3D environments, avatars, animation, real time facial mocap – but the music never struggled. The final death aria Dan wrote broke me.  The words are from the Book of Ruth where Ruth begs Naomi to let her follow her: “Entreat me not to leave thee, or to return from following after thee. For whither thou goest I will go, and where thou lodgest I will lodge …” I hear Charles telling me to go my own way, and I hear my response in this aria. Here is the beautiful soprano, Maggie Finnegan, with “Entreat Me.” https://www.youtube.com/watch?v=QlOrl5dbKQ0&t=11s

Be safe, be well, entreat a loved one,
Cerise and all of us at White Snake Projects, An Activist Opera Company