The three Team Nyx singers (Shirin Eskandani, Chris Carbin, and Stephen Carroll) took some time out of their busy rehearsal schedule to answer a few of our questions. 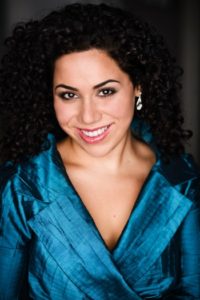 I love love. I love being in love. I love showing my love. I love receiving love. So it’s pretty fitting that I’m singing the role of Aphrodite, the goddess of love. I also take lots of pleasure in beauty.  I make it a point to find beauty in my day to day. Especially in everyday things. Whether that’s a tender moment between siblings on the bus or a kind gesture from a stranger.

I am so excited to see the audience’s reaction to this multi-disciplinary show. I think they’re going to be blown away!

If you could ensure your audience experienced one thing while listening to your music, what would it be?

Being present. An amazing performance has the ability to make us forget about our day to day and just be present in the moment. It’s meditative. It’s transformative. I would love to give this experience to my audience. 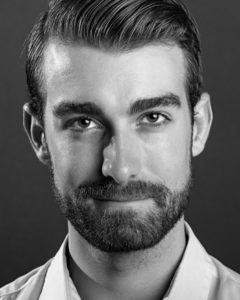 Why/how did you become involved in PermaDeath?

I studied at New England Conservatory and was lucky enough to be involved in workshop productions of some of Cerise’s other creations; namely Rev. 23 and Gilgamesh, part of the Ouroboros Trilogy. I have a real passion for new opera and off-the-wall art in general, and so when Cerise called me and offered me a chance to be a part of this project, and was thrilled to jump on board.

I would consider myself to be a casual gamer. It’s hard to pin down an absolute favorite, but some of the best I’ve played over the past few years would be Fallout 4, Titanfall 2, and the 2016 DOOM reboot. A couple of friends recently convinced me to start up on DOTA 2, but I’m really not sure I’m cut out for that level of strategy.

Do you think the story and technology of PermaDeath will influence the opera’s audience? How so?

A lot of opera companies, especially in North America, deal with this one question: how do we get young people interested in opera? PermaDeath comes at that question hard by utilizing experimental technology, by turning the typical operatic soundscape on its head, interweaving digital sound effects, an acoustic orchestra, and electric music. This isn’t a story about bickering aristocrats, it’s a story that nearly every member of the audience should be able to relate to in some way. PermaDeath brings so many new ideas to the table that have the potential not only to change the audience’s perspective on opera, but to completely reshape the perceived potential of 21st-century opera by the music industry itself. It’s all very exciting to be a part of.

My character is a grieving mother of 14 slain kids. Sounds just like me! But really, this is a tough one. I’ve played characters in both operas and video games that were motivated by vengeance and loss, but that’s pretty general. Niobe is probably the most different character I’ve ever had to play, but I’m really looking forward to the challenge!

I am looking forward so much to the technology aspect of it. I’ve been living in the musical world of the opera, which is great, but the idea of the motion-capture and epic avatar battle is something I’ve never seen done before, and I can’t wait to see how it all works!

I would consider myself a gamer, although nowhere near as serious of one as when I was as a teenager. I enjoy multiplayer online games the most, including two games called Heroes of the Storm and Overwatch. I have a few friends from different periods of my life that I get to play with, which is great, since we’re all in different parts of the country. It can be hard to keep from getting too rusty with gigs and all of that–there’s always a new crop of dexterous 11 year olds ready to wipe the floor with you–but I still enjoy it! As for single-player games, one that really stuck with me was Bioshock Infinite. It had really compelling narrative and was a beautiful game, and the pacing of the story and actual gameplay were fantastic. Sometimes you play a game to the end because you committed too much time to just stop playing it before it’s done, but that one I enjoyed through to the end.

I’d have to say Joe Dennis. I recently worked with him (and Rachele!) at Virginia Opera in Lucia di Lammermoor. I sang Normanno and covered him as Edgardo. That role is so brutal, a lot of the time you’re just hoping the tenor won’t blow himself out before the show is over. But Joe sang so beautifully every night, and he more than got through it. I learned so much about pacing the role, watching him really give where he had to but really put on the brakes where he didn’t, and he never compromised his singing. I’ve been involved in a bunch of productions of Lucia, but that’s the one where I learned the most. On top of all of that, he’s a super nice guy and was always kind, and we even got to spend a few hours one day just trying out different vocal things and talking about life as a tenor. It meant so much to me that he was so friendly and open.

What non-musical activity do you enjoy doing on your down time?

I am really into board games. I own about 60, and if the gig isn’t too far away, I like to drive and take a trunk full of them. They’ve gotten me through a bunch of summers in places where there wasn’t all that much to do. Some of my favorites include Scythe, Galaxy Trucker, Grand Austria Hotel, Cosmic Encounter, and Codenames.