In 2005, I started to think about what I would give Charles for his 75th birthday. Charles never wanted “things;” but he was passionate about opera, so I commissioned a new music group to make a song cycle for him. The commission did not get off the ground. Panicked that I was going to miss his birthday, I woke up one morning and Madame White Snake poured out of me. I waited until Charles had his first cup of coffee and handed him the draft.  He asked, “What is this?” I answered, “Your birthday present.” After five hard years, (yes, they were hard), Opera Boston premiered Madame White Snake in 2010. Charles looked at me and said, “The next time you want to give me a birthday present, remind me to say ‘no.’”

Why Madame White Snake? I realize now that, like many immigrants, I was in an all-consuming struggle to find my identity. We’re in-between people — we can never go back to our old homeland, and yet we do not belong in our new country, existing forever in the liminal space between here and there. We excavate our past to find roots, which enable us to grow into a strange new future. I envy our children who assimilate so easily into being American even as I grieve the loss of their cultural heritage.

“Madame White Snake.” That name evokes a wellspring of childhood memories. I think of sucking on ice kachangs in the sweltering night as the white snake glides across the makeshift stage to the accompaniment of cacophonous cars and trucks; of sitting cross legged on the floor glued to the grainy TV screen as she sings her love out to her mesmerized audience. 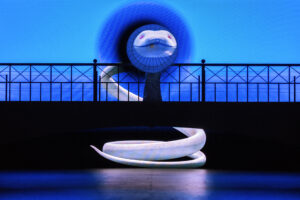 Yet as I delved deeper into memory, including digging up a movie I loved as a child starring HK superstar Lin Dai as the White Snake, I was shocked by the disconnect between memory and actuality. The movie portrayed the White Snake as a submissive victim, a saccharine-sweet innocent. Yet, that’s not how she lives in me. My White Snake is a powerful woman warrior, one who yearns for the ineffable, who fights for it, and who has the courage to seize the moment, risking everything. She was my role model, the reason I could start to shake off the cultural shackles of being a Chinese woman, a lifelong process I’m still struggling with. I had transformed the mythical White Snake from a helpless victim into a hero even as I had been transformed by Charles and my new homeland.

The White Snake in my Madame White Snake, the one that poured out of me one early morning in 2005, is a deeply flawed, terribly vulnerable, totally fearless and utterly human woman who battles demons inside and out and whose future is yet to be written. You can understand why I named this company after her.

Be safe, be well, be transformed, 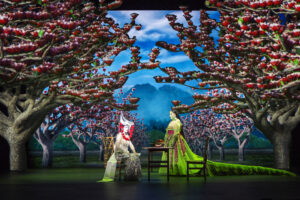