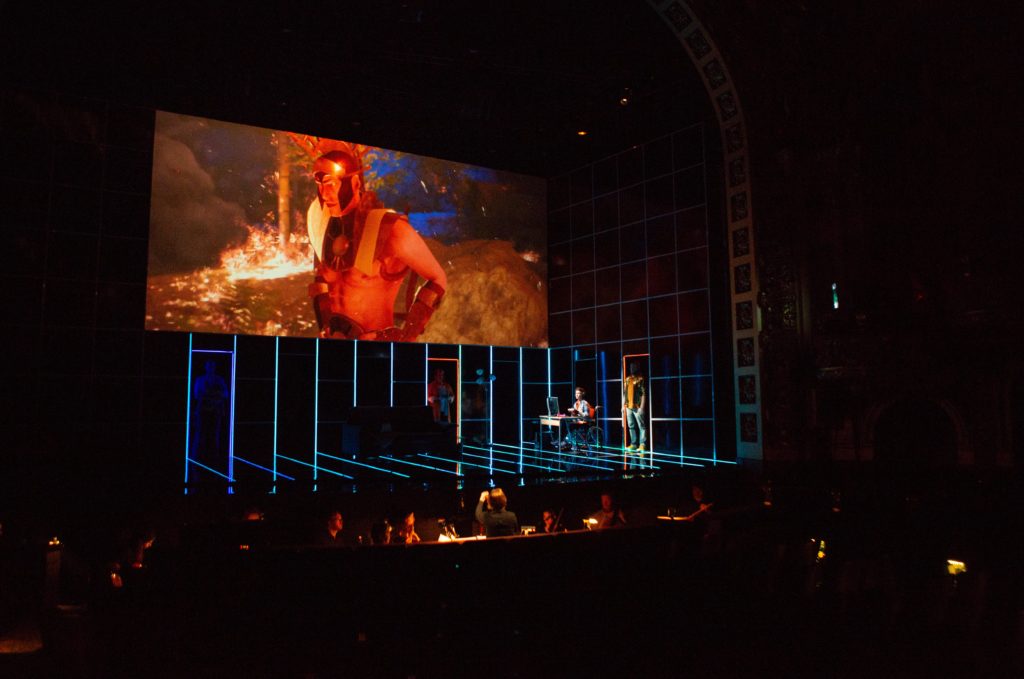 Creator and librettist Cerise Jacobs premiered her “most technologically ambitious production to date” (Boston Globe) at Boston’s Emerson Cutler Majestic Theater in September: the video game opera PermaDeath, co-written by Jacobs and her son, Pirate Epstein, founder of the video game company SqueePlay and a former New England Halo champion. The score was composed by Rome and Berlin Prize-winning composer Dan Visconti, who also composed Opera Philadelphia’s recent Andy Warhol-themed ANDY: A Popera. Now Jacobs’s first opera, Madame White Snake, which premiered in Boston in 2010 and went on to win the Pulitzer Prize for music the following year for the score by composer Zhou Long, will be given its Hong Kong premiere in two performances at the 47th Hong Kong Arts Festival in March of next year.

PermaDeath adds to the consistent track record of sensational, critically acclaimed productions that the “intrepid and artistically ambitious” (Opera magazine) Jacobs and her production company, White Snake Projects, have developed in Boston, including last fall’s comic addition to the Book of Revelation REV. 23, featuring an “endlessly creative score” by Julian Wachner (Classical Voice North America). After the recent premiere, under the headline “’PermaDeath’ premiere finds new life in the fusion of opera and video gaming,” the Boston Classical Review praised Jacobs’s “slick libretto” that “tells a convincing and engaging tale of friendship and loss through eight scenes that span one hundred minutes.” The same review commended Visconti’s score: “Through sparse textures, thorny dissonances, and driving rhythms that would be at home in a jug band jamboree, Visconti weaves musical tapestries that are equal parts Webern, Morton Feldman, and Blind Lemon Jefferson.” Calling PermaDeath “a vehicle for inventive music and staging,” the Boston Musical Intelligencer added that “Visconti’s setting of Elizabeth Barrett Browning’s Sonnet 43 (How do I love thee? Let me count the ways) for two sopranos is a standalone masterpiece.” Highlights from the world premiere of PermaDeath can be seen here.

The Hong Kong premiere of Madame White Snake marks the fifth production of Jacobs’s celebrated operatic debut, which is based on one of China’s most well-known folktales, the story of a demon in pursuit of love. The score, blending Chinese and Western elements, made Zhou Long the first Chinese laureate in the history of the Pulitzer Prize, and after the 2010 Boston premiere, the opera was produced the same year by the co-commissioning Beijing Music Festival, followed by a performance in Taiwan in 2013. It was revived in Boston in 2016 as the first opera in Jacobs’s complete Ouroboros trilogy, hailed by Berkshire Fine Arts as “the most ambitious opera undertaking Boston has ever seen.” The cast from that Boston revival will reassemble for the Hong Kong premiere. Soprano Susannah Biller, praised for her “incandescent, exquisitely supple soprano” (Dallas Morning News) and her “light, sweet lyric voice and coloratura agility” (Chicago Tribune) will sing the title role, joined by three singers who created their roles in the original 2010 production: renowned male soprano Michael Maniaci, bass Dong-Jian Gong, and tenor Peter Tantsits. The Hong Kong premiere also features the Hong Kong Philharmonic Orchestra, Hong Kong Arts Festival Chorus and Hong Kong Children’s Choir, and will be conducted by Lan Shui, who was the conductor in Taiwan and for the Boston revival in 2016. It was after that monumental undertaking of the entire trilogy that the Boston Musical Intelligencer proclaimed Madame White Snake to be “excellent, a near perfect score,” and the South Shore Critic blog added: “The crowning moment was a (well deserved) standing ovation for Jacobs, whose obvious glowing elation with the reception of this audience was unforgettable. After decades of work on her trilogy, the palpable warmth from the opera-lovers present seemed to overwhelm her, as well it might. It was a magnificent night for opera.”