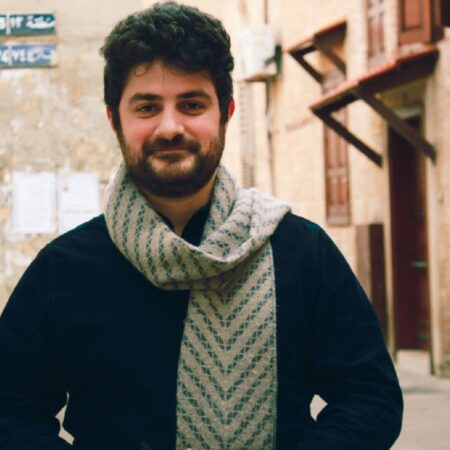 Born in Lebanon in 1991, Wajdi Abou Diab obtained his license in piano in 2014, then in musical composition and electronic music in 2016, from the National Conservatory of Music of Lebanon, where he also teaches piano, harmony, and music theory. He is currently pursuing a master’s degree in Traditional Musicology at Antonine University.

He is the founder and director of the Lebanese Living Composers Channel (LLCC) and Free Music Education for All projects, and he is also founder, principal conductor, artistic director, and arranger of Orchestra El Mokhyam and Choueifet Orchestra and Chorale. Recently, he was chosen as the Global Youth Ambassador to represent his country at the Global Music Conference 2021.

Wajdi has released several albums, including “Dances for the assymetrical world,” “Samme’na shi mna’erfou,” and “Da’watou mawten Ila l ‘asha’,” and has published several books of music like “Arabic Folk Tunes,” and “Longa and Sama’I with piano accompaniment.” He received numerous honoraria for some of his compositions such as “Cry from the frozen pole” which won the HONORABLE MENTION and the SPECIAL PRIZE BY CLUSTER at the LIMF 2020 Composition Competition, and for his composition The Youngest, which received a certificate of appreciation from Cergy Pontoise orchestra-studio after its participation in the 12th International Meeting of Young Composers in Cergy Pontoise. In addition to having won numerous calls for sheet music such as Deterritorializing the Realm of New Music, by Anoush Moazzeni and Canadian music, for his piece TAFA’IL for prepared piano and tape, the call for sheet music by Dustin White project (album “Ri Ra”) for his piece THE AWISS DANCE for solo bass flute, David Bohn’s call for sheet music 15 minutes of fame for his piece Dabket El 2020.