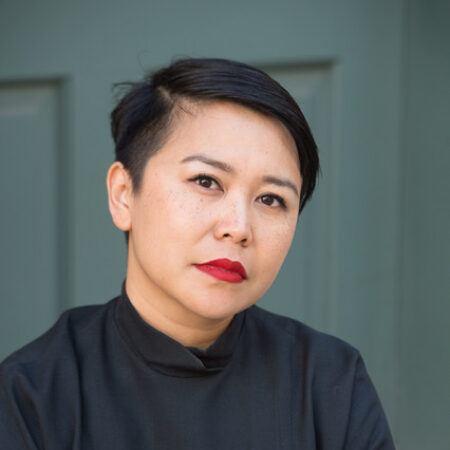 Sokunthary Svay was born in a refugee camp in Thailand shortly after her parents fled Cambodia after the fall of the Khmer Rouge regime. They were sponsored to come to the United States and resettled in the Bronx where she grew up. A founding member of the Cambodian American Literary Arts Association (CALAA), she has received fellowships from the American Opera Project, Poets House, Willow Books, and CUNY, as well as commissions from Washington National Opera, the Asian American Writers’ Workshop, White Snake Projects, and ISSUE Project Room. In addition to publishing a poetry collection, Apsara in New York (Willow Books, 2017), Svay has had her writing anthologized and performed by actors and singers. Svay’s first opera, Woman of Letters, set by composer Liliya Ugay, received its world premiere at the Kennedy Center in January 2020 as part of the American Opera Initiative. A recent recipient of the OPERA America IDEA grant, her second opera with Ugay, Chhlong Tonle, received its premiere in March 2022. She is a doctoral candidate in English at the CUNY Graduate Center.