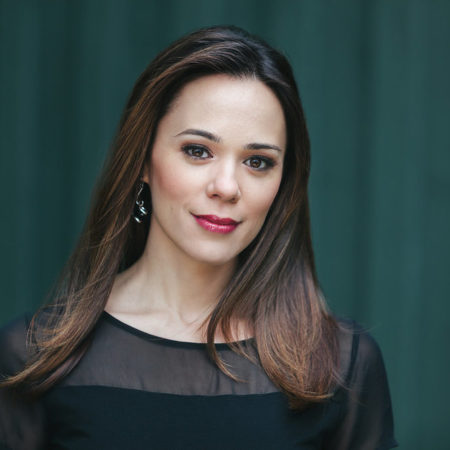 Rachele Gilmore has established herself as one of America’s most sought-after coloratura sopranos, and continues to thrill audiences around the globe combining what Opera News describes as a “silvery soprano…with an effortlessness that thrills her audience.” A regular performer in America, Europe, and Asia, Ms. Gilmore is consistently praised for being “the vocal standout” and a dynamic actress; “displaying more talent and charm than any one person should be allowed to possess.”

Most recently, Ms. Gilmore joined the Seoul Philharmonic for scenes from Unsuk Chin’s Alice in Wonderland. This season, she then returns to Opera Omaha for performances of Nannetta in Falstaff and essays the title role in Lucia di Lammermoor with Virginia Opera. In concert, she appears with the Pittsburgh Symphony for both Haydn’s Creation and Handel’s Messiah. Next season she joins White Snake Projects for their new opera PermaDeath, and the Kansas City Symphony for Handel’s Messiah.

Rachele Gilmore’s 2016-2017 season featured performances of Gretel in Hansel und Gretel with the Lyric Opera of Kansas City, Marie in La fille du regiment with Austin Opera, and Olympia in Les Contes d’Hoffmann with Hawaii Opera Theatre. She also appeared in concert with the Los Angeles Philharmonic for performances of the Haydn Creation and with the Indianapolis Symphony Orchestra for a performance of Mozart’s Exsultate, jubilate and three songs by Duparc.

The 2015-2016 season included performances of Blondchen in Die Entführung aus dem Serail with the Theâtre Champs-Elysées, and returns to Boston Lyric Opera as Sophie in Werther and the Glimmerglass Festival as Ninetta in La gazza ladra.

The 2014-2015 season featured a reprisal of the role of Alice in Chin’s Alice in Wonderland with the Los Angeles Philharmonic and the BBC Symphony Orchestra. Additionally, she debuted with Opera Omaha as Gilda in Rigoletto, NCPA Beijing as Sophie in Der Rosenkavalier, and closed the season as Blondchen in Die Entführung aus dem Serail in a debut with Festival d’Aix en Provence.

In the 2013-2014 season, Ms. Gilmore’s engagements included the title role in Lucia di Lammermoor for her debut at Opéra de Lille;La Monnaiein Brussels for Ophélie inHamlet; Olympia in Les contes d’Hoffmann with the Bayerische Staatsoper; Gilda with Opera Colorado; and a return to the Glimmerglass Festival, as Zerbinetta in Ariadne auf Naxos.

The 2012-2013 season brought Ms. Gilmore’s role debut as the Queen of the Night in Opera Philadelphia’s production of Die Zauberflöte and highly acclaimed performances as Amina in La sonnambula with Florida Grand Opera.

During the 2011-2012 season, the soprano made her debut with Teatro alla Scala, as Olympia in Robert Carsen’s production of Les contes d’Hoffmann; sang Blonde in Die entführung aus dem Serail with Grand Théâtre Genève, bowed as Rosina in Il barbiere di Siviglia with Opéra de Vichy, reprised the roles of Das Feuer and Die Nachtigall with the Bayerische Staatsoper, and sang her first performances of Cunegonde in Candide with Portland Opera.

To begin the 2010-2011 season, Ms. Gilmore returned to the Metropolitan Opera, covering the role of Olympia in Les contes d’Hoffmann, following which she sang the roles of Das Feuer and Die Nachtigall in L’enfant et les sortileges with the Bayerische Staatsoper, led by Kent Nagano. She then returned to Knoxville Opera to make her role debut as Elvira in Bellini’s I Puritani, and took the stage as Gilda in Rigoletto with Michigan Opera Theater.

Most notably in 2009, Ms. Gilmore made a “show-stopping” [Classical Source] debut with the Metropolitan Opera, in the role of Olympia in Les contes d’Hoffmann. Ms. Gilmore began the 2009-2010 season as Zerbinetta in Ariadne auf Naxos with Indianapolis Opera, and performed this role later in the season for Boston Lyric Opera. In February of 2010, Ms. Gilmore made her house and role debut with Knoxville Opera in the title role of Lucia di Lammermoor. In the spring, she sang the title role in the groundbreaking Swiss premiere of Unsuk Chin’s Alice in Wonderland with Grand Théâtre de Genève. Other notable appearances include her European debut with Deutsch Oper am Rhein, singing Blondchen in Die entführung aus dem Serial.

Rachele is a native of Atlanta, Georgia, and received her Bachelor’s of Music from Indiana University and continued with Graduate studies at Boston University. She was a member the Young Artist Programs of Glimmerglass Opera, Florida Grand Opera, and Aspen Music Festival’s Opera Center, and was a winner in Placido Domingo’s Operalia World Opera Contest in Paris.