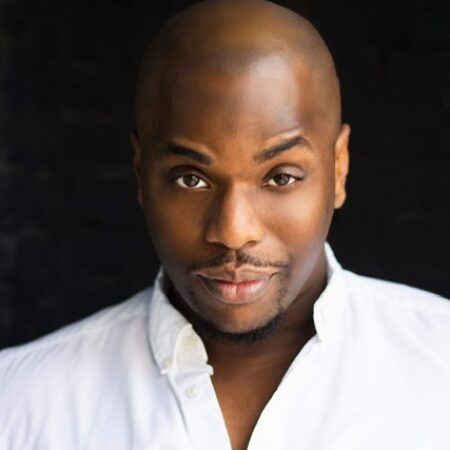 Patrick Dailey has been described as possessing “a powerful and elegant countertenor voice” (Los Angeles Daily News) and a “VOCAL STANDOUT” (Boston Classical Review). His artistry was identified early through the national NAACP ACT-SO Competition (2005 and 2006), the NFAA ARTS, and Grady-Rayam Prize In Sacred Music of the Negro Spiritual Scholarship Foundation. Dailey made his professional operatic debut with Opera Saratoga as the first countertenor member of the company’s Young Artist program and was the first countertenor invited to Opera New Jersey‘s Victoria J. Mastrobuono Emerging Artist program. Operatic repertoire includes Oberon in Britten’s A Midsummer Night’s Dream, Nerone in Monteverdi’s L’incoronazione di Poppea, and Belize in Eötvös’ Angels in America. He performs regularly with Harlem Opera Theater, ALIAS Chamber Ensemble, Memphis Symphony Orchestra, and has appeared with the Mid-Atlantic Symphony Orchestra, the Fayetteville Symphony Orchestra (NC), Soulful Symphony, Arkansas Philharmonic Orchestra, and Baltimore Symphony Orchestra. On January 19, 2009, Mr. Dailey sang a featured duet with Aretha Franklin as the finale for the annual Let Freedom Ring Celebration at the John F. Kennedy Center for the Performing Arts. Additionally, he has been a featured artist with Cook, Dixon, and Young (formally Three Mo’ Tenors) since 2012.

In the summers of 2015 and 2016, Mr. Dailey was a young artist with the American Bach Soloists. Soon after he sang the world premiere Frederick Douglas: The Making of an American Prophet composed byGrammy Award winning country songwriter Marcus Hummon and debuted with the Memphis Symphony Orchestra under the baton of Robert Moody. Additionally in 2016, Mr. Dailey made international debuts in the UK and Brazilian premieres of Hasse’s Marc’Antonio e Cleopatra with the Woodhouse Opera Festival and Il Festival de Ópera Barrocade Belo Horizonte and he made his Subculture NYC debut at the invitation of Tony Award winning composer Jason Robert Brown as a part of Brown’s broadway cabaret residency. In the spring of 2017, he debuted with Opera Louisiane as Telemaco in Michael Borowitz’s world premiere jazz-gospel orchestration of Monteverdi’s Il ritorno d’Ulisse in patria and debuted with the Grand Rapids Symphony singing Bernstein’s Chichester Psalms under the baton of Michael Christie. Soon after, Mr. Dailey returned to the U.K. that fall for the international premiere of Soosan Lolavar’s I.D. Please in the Tete a Tete New Opera Festival in London. In the fall of 2018, he sang the role of Mini-B/Boris the Boar in the world premiere of Dan Visconti and Cerise Jacobs’s Permadeath: A Video Game Opera with White Snakes Projects in Boston, MA to great acclaim. Mr. Dailey became the first countertenor to appear with Shreveport Opera singing Kyle in Robert Paterson’s Three Way: Masquerade in 2019. The remainder of his 2018/2019 season included debuts and appearances with the Austin Baroque Orchestra the IRIS Orchestra of Memphis, TN, Music By Women Festival, and Boston Early Music Festival. Since then, Mr. Dailey made appearances with the Chicago Philharmonic, Missouri Symphony, the 2021 ACDA Southern Regional Conference, and debuted at the historic Ryman Auditorium.

Mr. Dailey is featured in Fatherhood, a documentary directed by award winning London based director, Ben Gregor, which premiered on FUSE TV in 2019. He is also a featured on recording projects such as the debut album of acclaimed duo and super producers Louis York (Chuck Harmony and Claude Kelly), American Griots (2019), Adrian Dunn’s Redemption Live in Chicago (2020), and the self-titled release from The Aeolians of Oakwood University under the direction of Dr. Jason Max Ferdinand (2020).

Growing in his reputation as a scholar, Mr. Dailey was invited to the Center for Black Music Research‘s inaugural Black Vocality Symposium in 2013 giving a performative presentation entitled “The Anatomy of the Black Voice: Peculiarities, Challenges, and Regional Differences”. Since that time, he been Artist-in-Residence, masterclass clinician, and guest lecturer at Southern University, Prairie View A&M University, the University of Arkansas, and Vanderbilt University among others. Mr. Dailey was lead soloist and vocal music curator of the official MLK50 Commemoration at the National Civil Rights Museum in 2018 in Memphis, TN. In the fall of 2019, he presented at the inaugural Harry T. Burleigh Week organized by the Burleigh Legacy Alliance of Burleigh’s hometown of Erie, PA and regularly presents lectures and programs in conjunction with the organization. In June 2020, Mr. Dailey curated and presented a virtual clinic and webinar entitled “A Stirring in My Soul: The Negro Spiritual and Social Justice Movements” presented by the National Museum of African American Music.

Mr. Dailey is a 2012 graduate of Morgan State University and received his master of music from Boston University. He currently serves on the voice faculty of Tennessee State University where he established the Big Blue Opera Initiatives (BBOI) and the annual Harry T. Burleigh Spiritual Festival. Additionally, he is the founding artistic director of the W. Crimm Singers (aka Wakanda Chorale), professional ensemble in residence of BBOI. He is a co-founding member of historically informed crossover ensemble, Early Music City.

Mr. Dailey serves on the boards of ALIAS Chamber Ensemble, the International Society of Black Musicians, the International Florence Price Festival, Nashville Rep, and the Artistic Planning Committee of the Nashville Symphony. He also serves as community project curator with Intersection Contemporary Music Ensemble and arts and culture coordinator of the NAACP-Nashville Branch. A passionate advocate for Historically Black Colleges and Universities, he is a  consultant on HBCU initiatives with Opera America, Early Music America, and New Music USA and is an artist ambassador of the Music Inclusion Coalition. He is on the faculty of the Narnia Festival of Narni, Italy leading a program on African American Concert and Sacred Music, and is the program director of the Nashville Opera- Big Blue HBCU Fellowship, an HBCU initiative of the the company in partnership with TSU. Most recently, Dailey was named to the 2020 class of the Nashville Black 40 Under 40 and he was recognized for Outstanding Service from the Coalition for African Americans in the Performing Arts of Washington, DC. Additionally, he is a 2020 recipient of an Individual Artist Fellowship from the Tennessee Arts Commission.

To find out more about Mr. Dailey, visit www.patrickdaileyct.com.