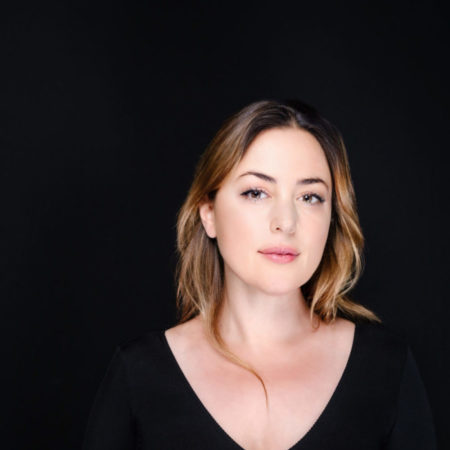 Through an illustrious career being equal parts creator and connector, composer Paola Prestini is known both for her “otherworldly…outright gorgeous” music (The New York Times), as well as her role as the “visionary-in-chief” (Time Out New York) co-founder and Artistic Director of the non-profit music organization National Sawdust.

As the Wall Street Journal says, many recognize Prestini for “pushing the boundaries of classical music through collaborations.” Over 25 large scale artistic works are the result of Prestini joining forces with conservationists, poets, virtual reality film directors, astrophysicists, and puppeteers.

Prestini is particularly known for her command of multimedia, exemplified with successes like the Hubble Cantata, a live musical performance which currently stands as the largest shared virtual reality experience to date, and Aging Magician, a combination of theater, opera, puppet show, string quartet and chorus which continues its run of performances at San Diego Opera this season. Musically, she draws from folk, 16th century, improvisation, and other palettes, creating unique worlds for each collaboration.

For her efforts, she has made a considerable imprint on the artistic ecosystem: her accolades include being named as one of the “Top 100 Composers in the World” (NPR), one of the “Top 30 Professionals of the Year” (Musical America), one of the “Top 35 Female Composers in Classical Music” (The Washington Post), and Brooklyn Magazine’s 2019 list of “influencers of Brooklyn culture…in perpetuity” alongside household names like Chuck Schumer and Spike Lee.

Prestini’s collaborative efforts began in 1999 when, as a Juilliard student, she founded an arts production non-profit named VisionIntoArt (VIA). After the success of VIA, Prestini created the VIA Records label, which was dubbed “an essential new voice in the future of American classical music” (New Sounds, WQXR). In 2015, Prestini increased the scale of VIA by helping orchestrate the opening of National Sawdust, a music non-profit that has not only served as a venue for artists to perform, but an incubator to financially support bold, exciting artists and foster additional creative collaborations. National Sawdust has since been recognized as “a force for artistic progress and social engagement” (Stereophile) and hosts around 250 concerts per year. She has since consolidated organizations, relaunching VIA as National Sawdust Projects and VIA Records as National Sawdust Tracks. Moreover, there is a deeper emphasis on mentorship. National Sawdust programs invest in emerging musicians through mentorship, through the creation of the BluePrint Fellowship for composers with The Juilliard School as well as National Sawdust’s Hildegard Competition for emerging female, trans, and nonbinary composers.

Prestini’s music and works have been commissioned by and performed at the Brooklyn Academy of Music, the Barbican Centre, The Brooklyn Youth Chorus, Brooklyn Rider, The Cannes Film Festival, Carnegie Hall, Choir of Trinity Wall Street, the Kennedy Center, The Los Angeles Philharmonic, The Los Angeles Opera, The New York Philharmonic, Roomful of Teeth, and the Young People’s Chorus of NYC, among others. Her collaborators include writers Mark Campbell, Rinde Eckert, Cerise Jacobs, Brenda Shaughnessy, and Royce Vavrek; filmmakers Murat Eyuboglu and Eliza Mcnitt; directors Julian Crouch, Michael Counts, Eric Simonson, Tomer Zvulun,  and Robert Wilson; Designers and visual artists such as Erika Harrsch and Vita Tzykun; performers such as Helga Davis and Jeffrey Zeigler; conductors such as Lidiya Yankovskaya and Julian Wachner; and extra musical works with scientists such as conservationist William deBuys,  astrophysicist Mario Livio,  and the research to impact lab, Enact Lab. She is a frequent partner and collaborator to the renowned indie opera producer, Beth Morrison Projects.

Recent completed works include the grand opera Gilgamesh for Arts Emerson at the Cutler Majestic; the Labyrinth Installation Concertos, performed at the Isabella Gardner Museum and commissioned by the Krannert Center; The Hubble Cantata with virtual reality, performed at Bric’s Celebrate Brooklyn, the Kennedy Center, and LA’s Ford Theater with Los Angeles Opera; the opera-theater work Aging Magician, commissioned by the Walker Art Center and Krannert Center with performances at ASU Gammage and the New Victory Theater; the choral installation Epiphany performed at BAM’s 2015 Next Wave Festival; The Colorado, Murat Eyuboglu’s eco/film cantata performed at the Metropolitan Museum of Art, Houston’s Da Camera series, Stanford Live and the Kennedy Center; The Hotel That Time Forgot, for orchestra and video artist Mami Kosemura performed at Carnegie Hall; We Breathe Again, a film score released on PBS and performed at National Sawdust’s Winterreise Festival; the choral/visual work The Glass Box for The Young People’s Chorus and the Yale Chorus; and The Imaginary World of Wild Order for the Mass Re-Imaginings Projects commissioned by Choir of Trinity Wall Street.

Prestini’s honors include two ASCAP awards and fellowships from the Sundance Institute as well as Paul & Daisy Soros. She has been granted residencies at MASS MoCA, The Park Avenue Armory, The Watermill Center, Florida’s Hermitage Artist Retreat, Wyoming’s Ucross Foundation, and LMCC Governor’s Island. Passionate about education, she has partnered with the New York Philharmonic and Carnegie Hall to teach at inner city schools in New York, and has worked with children in Italy, Africa, and Mexico, as well as with El Sistema in Venezuela.

Paola Prestini’s music is released on National Sawdust Tracks, Innova, and Tzadik Records; her writing is published in the Arcana series by Hips Road, and she is the editor of the New York Philharmonic’s Very Young Composer handbook. A graduate of The Juilliard School, she studied under Samuel Adler, Robert Beaser, and Sir Peter Maxwell Davies. Born in Italy, she currently makes her home in Brooklyn with her son Tommaso and her husband, the cellist Jeffrey Zeigler.