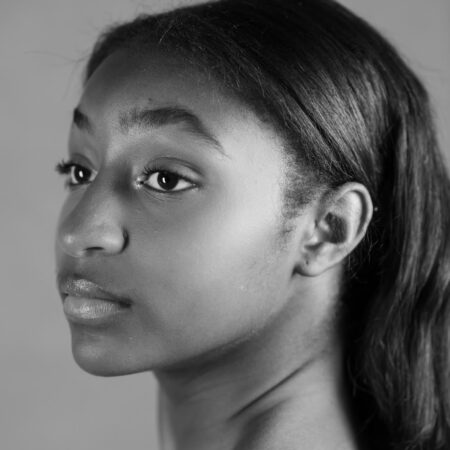 Olivia Mozie, resident of Greenville, SC, began dancing at the age of four at the School of Carolina Ballet Theater under the direction of Hernan Justo and Anita Pacylowski-Justo. She continued her training at English Theatre Arts, under Barbara English, and The Fine Arts Center. She continued her training her
sophomore year of high school at the The South Carolina Governor’s School for the Arts and Humanities, where she studied under Josee Garant, Miriam Mesa-Pelly, Tracy Vogt, Thomas Shoemaker, and Irina Ushakova. She later graduated from SCGSAH in 2020. She has placed top 12 in Contemporary and Classical Variations at Youth America Grand Prix. She was awarded full-tuition scholarships to attend summer intensives with Alvin Ailey, Ballet West, and Kansas City Ballet. Olivia now attends Boston Conservatory at Berklee, as a merit scholar, to pursue a B.F.A. in Contemporary Dance Performance. While at Boston Conservatory at Berklee, she has performed reworked works on the mainstage including: Jawole Willa Jo Zollar’s “Shelter,” restaged by Maria Bauman, “La Vivandière,” restaged by Gianni Di Marco and Adriana Suarez, and Jimmy Viera’s original work, “The Count Meets Duke.” As of the summer of 2022, she continued her studies with The New York City Rockettes and Complexions Contemporary Ballet.