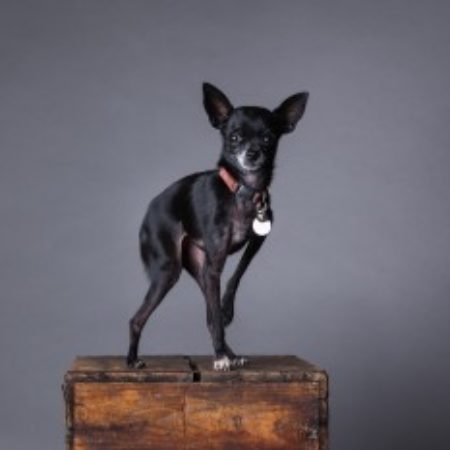 Micro Jackson got her moniker because she’s microscopic (as a teacup chihuahua, she fits in a teacup), she’s black, and has a white glove. She began exhibiting signs of being a diva very early on and got her first acting break at the MSPCA in Boston where she took over the staff and the facility with her dramatic exegesis of “Killing Me Softly,” rendered very loudly. Born without a left shoulder, Micro Jackson traverses the world speedily on three legs. When moved to show off (which she often does), she performs her “bicycle” act in which she races on two legs perfectly balanced.

Micro Jackson was tapped for the role of Cerberus the Hell Hound, beating out other contenders because of her loud piercing shrieks and her naturalistic mode of delivery. The audition panel was impressed by the way she lay ensconced in her soft woolly bed with her pointy little nose burrowed in deep, making scary “woop, woops” without lifting a muscle or batting an eyelash. She is proud of her handles #baddestofthebad and #hotchihuahua.