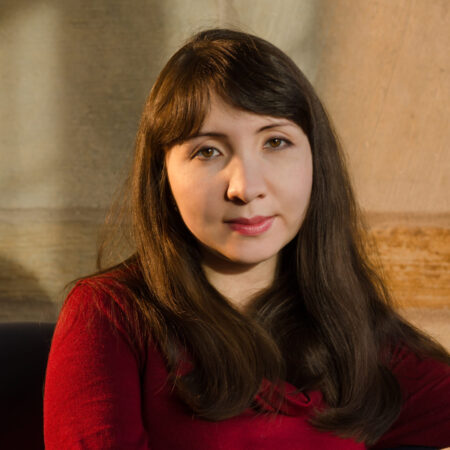 Described as “particularly evocative,” “fluid and theatrical… the music [that] makes its case with immediacy” as well as both “assertive and steely,” and “lovely, supple writing”, music by Liliya Ugay has been performed in many countries around the globe by the Washington National Opera, Nashville Symphony, Albany Symphony, American Composers Orchestra, New England Philharmonic, Yale Philharmonia, Next Festival, Norfolk Festival Choir, Aspen Contemporary Ensemble, Molinari Quartet, Victory Players, and Paul Neubauer among others. Her compositions have been featured at the Aspen, Norfolk, Cultivate, MIFA, American Composers, Chelsea, New York Electroacoustic Music, June in Buffalo, and Darmstadt New Music festivals, as well as the 52nd Venice Biennale. She has received awards from the American Academy of Arts and Letters, ASCAP, Yale University; in 2019 she was a finalist for the Rome Prize. As a pianist she promotes the music of repressed Soviet composers in her concert series Silenced Voices. Originally from Uzbekistan, Liliya serves as Assistant Professor of Composition at the Florida State University. She holds MM and DMA degrees from Yale; among her mentors are Aaron Kernis and Martin Bresnick.