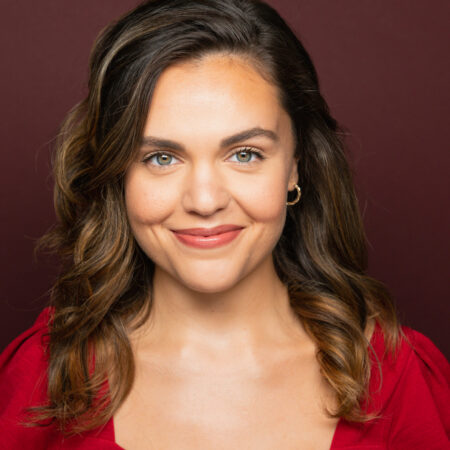 Peruvian-American mezzo-soprano Kelly Guerra is known for her fiery stage presence and “luscious mezzo timbre” (Boston Musical Intelligencer). In the summer of 2022, Kelly reprised the role of Justice Ruth Bader Ginsburg in Derrick Wang’s comic opera Scalia/Ginsburg at the Princeton Festival, also singing the role of Madame Silberklang in The Impresario. After she “awed audiences” as RBG in Scalia/Ginsburg in Chautauqua Opera’s 2021 season, she returns for a workshop of The House on Mango Street by Derek Bermel, and sings a recital of chamber music with the Chautauqua Symphony Orchestra Diversity Fellows. Upcoming performances include the title role in Maria de Buenos Aires at Kentucky Opera, and The Monitress in Suor Angelica at Opera Omaha.

A strikingly versatile performer, Kelly feels at home with many styles and eras of vocal music from Mozart to Héctor Lavoe. In the spring of 2022, she made her Los Angeles Philharmonic debut under the baton of John Adams in the Noon to Midnight Contemporary Festival, and premiered

Katherine Balch’s orchestral song cycle Illuminate with the California Symphony. Kelly was lauded as  “brilliant” by the Santa Barbara Independent for her performance as Lupita in the mariachi opera Cruzar  la Cara de la Luna with Opera Santa Barbara. In 2021-2022 she toured in the cast of (…Iphigenia) by  Wayne Shorter and Esperanza Spalding as Iphigenia Unbound, which was noted as “beautifully sung” by  the Washington Post.

Kelly won first place in Santa Barbara’s Performing Arts Scholarship Foundation competition in 2018,  prior to her residency as a Young Artist in the Opera Santa Barbara Chrisman studio, where she prepared  the roles of Suzuki in Madama Butterfly, Donna Rosa in ll Postino, and Stéphano in Roméo et Juliette. She also received a travel grant to Germany for language study from the Max Kade Foundation while  completing her DMA at UC Santa Barbara. BravoCalifornia raved that Guerra “created a sensation” as  Cherubino in Le nozze di Figaro.

Guerra has been a featured artist at the Lucerne Festival, Tanglewood Music Center, and the Bard Music  Festival. She has performed as a soloist with several ensembles including the Albany Symphony, Santa  Barbara Symphony, Garden State Philharmonic, The Orchestra Now, Contemporaneous, Opera Parallèle  and BluePrint.