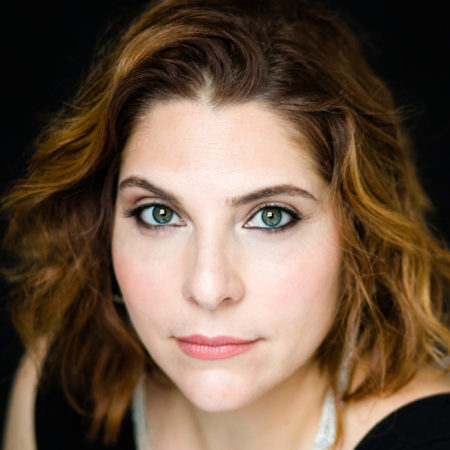 Mezzo-soprano Eve Gigliotti has a voice that been described as “powerful and agile” (New York Times), and is an “invisive actress” (Opera News). For the COVID-19 impacted 2020-2021 season, her engagements include a return to the Metropolitan Opera, performing Gertrude in Romeo et Juliette, Annina in La traviata, Mother Superior in The Fiery Angel (postponed), Mercedes in Carmen, and covering Mrs. DeRocher in Dead Man Walking, and she makes her Opera Maine debut as Mary in The Flying Dutchman. Eve is involved as creative producer and performer in various works in development including Untitled: Inspired by Film Stills with National Sawdust and No One Is Forgotten, an operatic adaptation of the play by Winter Miller.

Ms. Gigliotti’s original engagements during the COVID-19 shortened 2019-2020 season included her return to San Francisco Opera as Gertrude in Roméo et Juliette (performed), Gertrude in Hamlet with Washington Concert Opera (performed), Glasha in Kat’a Kabanova in a return to the Metropolitan Opera (cancelled), and the Alto soloist in Messiah with the Detroit Symphony Orchestra and Pittsburgh Symphony (performed). She also sang Elgar’s The Kingdom at Carnegie Hall with the American Symphony Orchestra (performed), and at National Sawdust she continued development of the highly anticipated Untitled: Inspired by Film Stills, an immersive chamber opera featuring composers Muhly, Mazzoli, Prestini, and Reid with a libretto by Vavrek and directed by R.B. Schlather. Original concept by Ms. Gigliotti who also serves as Creative Producer and Performer, produced by National Sawdust Projects.

In the 2018-2019 season, Eve Gigliotti returned to the Metropolitan Opera as Siegrune in Die Walküre, reprised The Pilot in The Little Prince with Opera Parallèle, joined New York’s Prototype Festival as Aunt in Mila, Great Sorcerer, and returned to the Seattle Symphony for Beethoven’s 9th Symphony. Additionally, she appeared with the Bard College Conservatory Orchestra for performances of Mahler’s Third Symphony, conducted by Leon Botstein, and made her Tanglewood Music Center debut as Siegrune in Die Walküre.

During the 2017-2018 season, Ms. Gilgiotti joined the Los Angeles Philharmonic for the U.S. premiere of A Trip to the Moon, San Francisco Opera for their production of Wagner’s Ring Cycle, both the Eugene Symphony and the Seattle Symphony for Handel’s Messiah, and Opera Parallèle as the Pilot in The Little Prince.

The previous season included a debut with Hawaii Opera as Giulietta in Les contes d’Hoffman, the world premiere of composer Mohammed Fairouz’s new oratorio, Al-Quds: Jerusalem at the Metropolitan Museum, a return to Opera Philadelphia to create the role of Dodo in the world premiere of Missy Mazzoli’s Breaking the Waves, a role she reprised with the Prototype Festival, and she joined the roster of the Lyric Opera of Chicago to cover the title role in Carmen.

In the 2015-2016 season, Ms. Gigliotti made her debut with the Washington National Opera, singing Siegrune and covering Flosshilde and the Second Norn in their production of Wagner’s Ring Cycle. She also appeared with Beth Morrison Projects for the premiere of Persona, and joined the Princeton Festival for their 2016 Summer season to sing Auntie in Peter Grimes.

The 2014-2015 season brought significant company debuts for Ms. Gigliotti, including Houston Grand Opera to sing Siegrune in Die Walküre; Milwaukee Symphony, for Handel’s Messiah; and Opera Santa Barbara to reprise the title role of Isabella in L’italiana in Algeri. Additionally, she debuted the role of Bradamante in director R.B Schlather’s gallery installation of Alcina in association with Whitebox Art Center, and concluded the season in her role debut as Suzuki in Madama Butterfly at Ash Lawn Opera.

Engagements during the 2013-14 season included appearances with Minnesota Opera, as Nazimova in Dream of Valentino, Florentine Opera, as Cornelia in Giulio Cesare, and Boston’s Odyssey Opera, as the title role in Mascagni’s rarely performed Zanetto. She also joined the Harvard-Radcliffe Orchestra for Verdi’s Requiem.

After her promising debut with the Metropolitan Opera as Mercedes in the Richard Eyre production of Carmen, Ms. Gigliotti returned in 2010-2011 reprising the role of Mercedes and appearing as Siegrune in Robert Lepage’s milestone production of Die Walküre, led by James Levine, broadcast worldwide in HD. Ms. Gigliotti appeared as Siegrune in the Metropolitan Opera’s production of The Ring Cycle as part of the 2012/13 season. Additional performances during the 2012-13 season included the title role in an updated version of L’italiana in Algeri with Wendy Taucher Dance Theater Opera Project in Martha’s Vineyard, reprising a role she has performed with Opera Southwest and Bilbao ABAO (Opera Berri Performance). On the concert stage, Ms. Gigliotti was seen with Carolina Chamber Music Festival, and Wolf Trap Opera in Recital, respectively. In recording, the recently released Opera America Songbook features Ms. Gigliotti performing “Archaeology,” a song written exclusively for her by acclaimed composer/librettist team David Little and Royce Vavrek.

Having won critical acclaim for her emotional portrayal as Ruth in the World Premiere of Nico Muhly’s Dark Sisters, produced by Gotham Chamber Opera, Music Theater Group, and Opera Philadelphia, directed by Rebecca Taichman and conducted by Neal Goren, Ms. Gigliotti has garnered attention for her interpretation within the new American repertoire. Ms. Gigliotti was invited by Houston Grand Opera (East + West Festival) to originate the role of Mrs. Parvin in composer Gregory Spears’s, The Bricklayer. Other highlights of the 2011-12 season included appearing with the Metropolitan Opera as Siegrune in Die Walküre under the baton of Fabio Luisi; making her Carnegie Hall debut in Bernstein’s Jeremiah Symphony no.1 with New York Youth Symphony, Ryan McAdams conducting; and returning to Carnegie Hall in portraying the title role of Djamileh with American Symphony Orchestra, Leon Botstein conducting. Ms. Gigliotti’s concert work during the season included Chanson Madècasses with Gotham Chamber Opera; and Stravinsky: Pairings (a performance of Berg’s Seven Early Songs and Debussy’s Chansons de Bilitis) with Greenwich Music Festival.