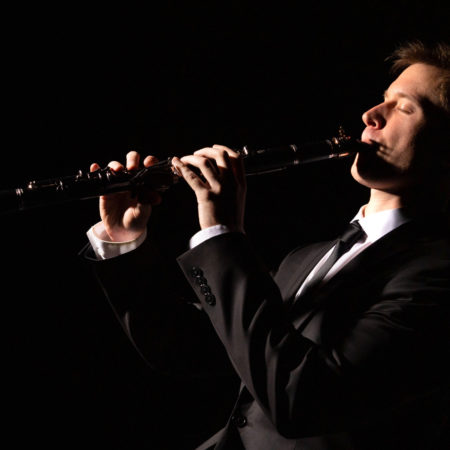 A Survivor’s Odyssey: The Journey of Penelope and Circe
Death by Life: A Virtual Opera—Spring 2021

Eric Schultz is an international prize-winning clarinetist. As 1st-prize winner of the American Protégé International Competition, he will be performing in a solo recital at Carnegie Hall next season. He is also a 1st-prize winner of the Brussels Grand Prize Virtuoso International Competition, and recipient of the prestigious Rislov Foundation grant for excellence in classical music, awarded for his performance of Carl Nielsen’s Clarinet Concerto.

He has performed with The Chelsea Symphony in New York City, and has performed in venues across North America and Europe with conductors such as Jens Georg Bachmann, Larry Rachleff, Bruno Weil, James Burton, Mischa Santora, and Henry Charles Smith. Additionally, he performed woodwinds in the orchestra for Nice Work If You Can Get It, the Tony Award-winning Broadway Musical on National Tour, and has performed at many international festivals, including Mozarteum Salzburg, Prague Summer Nights, and AlpenKammerMusik.

As an advocate for new music and founding clarinetist of the Victory Players ensemble, he is particularly passionate about commissioning and premiering new music. As part of the ensemble’s commitment to the outreach of new music, the group performs this music for young people and does masterclasses in local schools. Schultz is Assistant Professor of Music at Coastal Carolina University, where he teaches studio woodwinds, woodwind methods, and chamber music. He completed his Doctor of Musical Arts degree in clarinet performance at Stony Brook University.