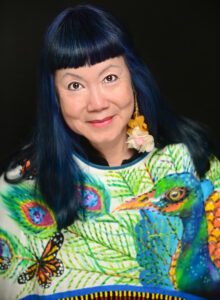 Cerise Lim Jacobs forges new American opera from her past in multicultural Singapore, her sojourns around the world, and her acute awareness of the social issues of our time, creating original libretti that range from the mythological to the topical. With her husband Charles, she conceived of and wrote the libretti for her first large-scale project, Ouroboros Trilogy, comprising Scott Wheeler’s Naga, Paola Prestini’s Gilgamesh, and Zhou Long’s Madame White Snake, winner of the 2011 Pulitzer Prize for Music. The complete Ouroboros Trilogy premiered in Boston in September 2016.

After the success of Ouroboros Trilogy, Jacobs transformed the fundraising entity Friends of Madame White Snake into the “activist opera company” White Snake Projects, which commissions, develops and produces original opera committed both to the highest production values and to social activism. Following the trilogy, her astonishing output of an opera a year saw premieres of her REV. 23, a satirical take on life after the prophesied Apocalypse, composed by Julian Wachner; PermaDeath, one of the world’s first video game operas, composed by Dan Visconti; and I Am A Dreamer Who No Longer Dreams, a wrenching story about immigration composed by Jorge Sosa.

With the arrival of the COVID-19 pandemic, Jacobs and White Snake Projects nimbly pivoted to online production, investing in new industry-transforming technology and taking risks that a larger company could not have tolerated. Their first digital opera, Alice in the Pandemic, again composed by Sosa, was called “wildly imaginative, musically powerful and technically courageous” by Opera News, while the Boston Musical Intelligencer found that it set “a new standard that is undeniably contemporary, accessible, immersive, and relevant.” Alice in the Pandemic was subsequently acquired by the Library of Congress for its Performing Arts COVID-19 Response Collection. The digital opera Death By Life, premiering in May 2021, explores systemic racism and long-term incarceration using texts by incarcerated writers and their families.

Born into a traditional Chinese family in Singapore while it was under British rule, Jacobs grew up absorbing the disparate influences of Chinese, Malay, Indian and Western cultures. Following studies at the University of Pittsburgh and Harvard Law School, her two-decade law career included serving as a trial partner at one of the largest law firms in New England and spending five years as a federal prosecutor at the U.S. Attorney’s Office in Boston. Since retiring from law, Jacobs has returned to her creative voice in opera, music, art, and food. She is the President of the Charles and Cerise Jacobs Charitable Foundation and has endowed the Charles M. Jacobs Fund for Equal Rights and Social Engagement at the University of Chicago Law School and College. She is a co-founder, with her son Pirate Epstein, of the mobile gaming company SqueePlay; and a founding member of Evidox, an e-discovery company.

Jacobs was named a 2017 Mover & Shaper by Musical America, and one of Boston’s 100 Most Influential People of Color by the Boston Globe in 2018.