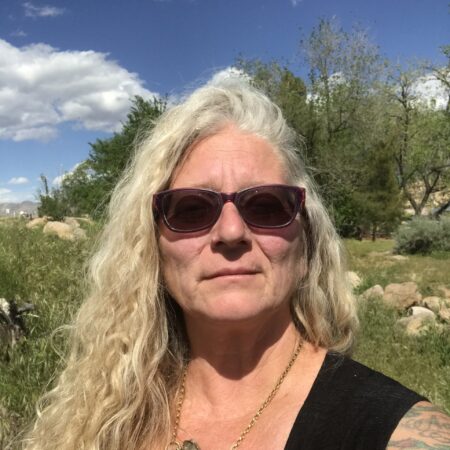 Carole was born in Orleans, France to American parents. She grew up in the Western US, where she began her art practice, first in clay and bronze, then after her children were born, shifted to fiber. She was incarcerated in 2006 for an act committed in self-defense after severe domestic violence. She served 13 years in prison, where she created art against all odds, developing her whimsical wildlife sculptures as well as a body of work that reflects experiences of women dealing with domestic violence and the legal system. Her work has been shown at national and international conferences and exhibits.
Having spent many years as a successful public artist prior to her incarceration, Carole struggled to find materials to create with inside. She taught herself to crochet and developed her own innovative techniques, reflecting on her own experiences and crafting vibrant worlds in the colorless setting of prison. This fantastical and colorful artwork that Carole created inside her prison cell, was a militant act in the face of her confinement within a system that criminalizes survivors of trauma and abuse.

While incarcerated, Carole supported other women by teaching art and mentoring other survivors of domestic violence and abuse. Carole has long had a vision to support other women who are experiencing abuse or healing from trauma, particularly women in rural communities who have fewer resources available to them.

After her release in 2019, Carole realized that she needed stability and secure housing for herself before she could help other women. Her instinct to make art, no matter what, led to the vision for the Fish House: a glowing larger-than-life fish sculpture rising out of the desert where she could live with her chickens and pet fish. The fish structure will also house an art studio. Once she is set up there, she will upgrade the land for a retreat space and therapeutic sculpture workshops where other survivors can come, learn, create and heal.

Artist Statement:
Prison Fish grew out of my frustration with the system that keeps inconvenient women down in Utah.
After experiencing abuse in my first marriage, I vowed to never put up with it again. Decades later I found myself enmeshed with an individual who had obscured a violent, criminal past. My attempts to seek aid through law enforcement were met with cavalier derision. This attitude emboldened him further. After six months of physical and emotional torture, which included being forced to watch while he burned pets alive, he cornered me and I shot him.
Being the only one of five wives to survive being married to this man, and imprisoned for it, broke my faith in the justice system. I was categorized as a woman who must have said something to set him off, furthering the attitude that a good wife keeps her mouth shut or deserves what happens to her.
Prison Fish embodies the despair I felt, having survived something horrific and preventing the deaths of my children and grand daughters, only to have the state do their best to destroy what was left of my life. They removed my identity, broke my health, and attempted to deny any efforts I made to contribute and be involved with society.
Despite this, I persevered in creating pieces that were the antithesis to the state’s  removal of all color, texture, intellectual enrichment, and family from my life. Each piece was a subversive act. Many were confiscated  and destroyed. Prison Fish is one of a handful that survived.