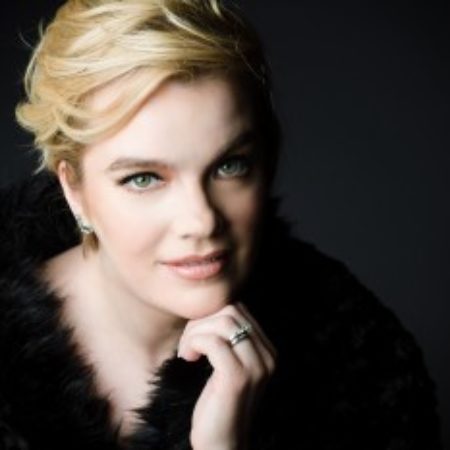 Amy Shoremount-Obra was recently hailed as “Incredible! Another vocal highlight of the evening. She performed with a tone steeped in longevity, endurance, and agility… This is a voice of true substance.” (Boston Music Intelligencer) She made her Metropolitan Opera début as First Lady in Julie Taymor’s acclaimed production of Die Zauberflöte. Since, she returned for productions of Lady Macbeth of the Mtsensk District, Norma, Nabucco, and Don Giovanni. She returns this season to reprise her role as First Lady in Die Zauberflötewith the Pacific Symphony. She also sings the soprano solo in Beethoven’s Symphony No. 9 and Vaugh Williams’s Serenade to Music with National Chorale.

Last season, Shoremount-Obra performed a concert tour throughout the Hawaiian Islands with violinist Eric Silberger as part of the inaugural season of the Hawaii International Music Festival, which Ms. Shoremount-Obra herself co-founded. This season, she returns to tour again in Honolulu, Hawaii, and Maui. More information about the festival can be found at www.himusicfestival.com. She also performed two roles in Opera America’s New Opera Showcase, a solo performance in Rossini’s Petite messe solennelle with the New Choral Society, a performance for the Sherrill Milnes Gala at The Harmonie Club in New York City, a recital for the Wagner Society of New York, and a fundraiser concert for the Hawaii International Music Festival at The Old Church. Ms. Shoremount-Obra also filmed her first major motion picture début as an opera singer in Untouchable, starring Bryan Cranston and Kevin Hart, which is set to be released in 2018.

Following her “electrifying” portrayal of Donna Anna in Don Giovanni with Venture Opera, she was featured in the Sound Bites article of the May 2016 issue of Opera News, where they hailed: “Shoremount-Obra’s shining, healthy soprano had all the power and glory required for ‘Or sai chi l’onore,’ demonstrating agility, accuracy, and beauty as well as gale-force temperament.” Other recent engagements have included Leonore in Fideliowith Grand Harmonie Orchestra; Donna Anna in Don Giovanni with Opera Las Vegas and the Savannah Voice Festival; Schubert’s Mass in G major at Carnegie Hall; Verdi’s Requiem with National Chorale at Lincoln Center; and a recital with the Savannah Voice Festival. Additional notable roles include Ifigenia in Händel’s Oreste with the Spoleto Festival in Italy, Marchesa in Verdi’s Un giorno di regno with Odyssey Opera of Boston, and a role début as Fiordiligi in Così fan tutte with Annapolis Opera. Ms. Shoremount-Obra collaborated with composer Mikael Karlsson and librettist Elle Kunnos de Voss on the one-woman monodrama The Echo Drift, which was written for her and premiered at the house of Sweden in Washington DC in 2014. As a concert artist, Ms. Shoremount-Obra has appeared in Mozart’s Coronation Mass and Haydn’s Lord Nelson Mass with the Scarsdale New Choral Society and as the Soprano Soloist in Fauré’s Requiem and Brahms’ Requiem, both at Carnegie Hall.

She performed in several prominent venues throughout the world including Carnegie Hall, Alice Tully Hall, David H. Koch Theater, the Oslo Konserthus and the Oslo National Gallery in Norway, The Tanglewood Institute, and The Sheldon in St. Louis. She has been a featured performer representing The Metropolitan Opera at the Annual Viennese Opera Ball in New York City for seven consecutive years. She made her début with the New York City Ballet in 2009 performing the role of First Fairy in Mendelssohn’s A Midsummer Night’s Dream.

Ms. Shoremount-Obra also finds success in the realm of contemporary and new music. Starting with her cover of John Zorn’s La machine de l’être, a one-woman monodrama, with New York City Opera, she has gone on to perform two workshop performances and the world premiere of Grammy-nominated composer Tarik O’Regan’s monodrama The Wanton Sublime with American Opera Projects. She was also featured in the world premiere of Paola Prestini’s new opera De Deo in the role of Beattrice with New York City Opera VOX and was a resident artist with American Opera Projects’“Composer and the Voice” Program, premiering new works all season for a team of up-and-coming composers.

She is featured on two operatic world-premiere Recordings on Albany Records: as Jenny on the recording of Robert Ward’s Roman Fever and as Nina in Thomas Pasatieri’s The Seagull. Amy is a native of New Jersey, and currently continues her vocal studies with Diana Soviero. She is a graduate of The Manhattan School of Music and The Juilliard School.