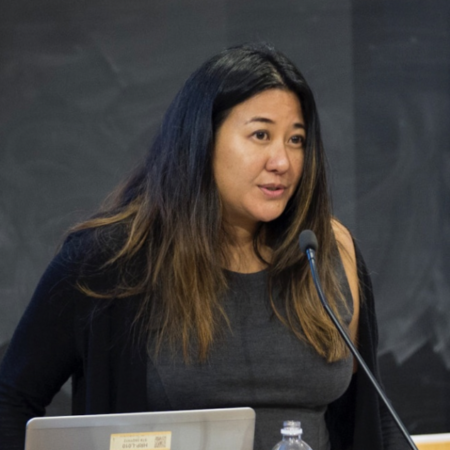 Alice Kim is Director of Human Rights Practice at the Pozen Family Center for Human Rights. She directs the Human Rights Lab and teaches courses on contemporary issues in human rights practice. During its initial three years, the Lab will engage students, scholars, and community in human rights work addressing mass incarceration and racialized policing.

Kim writes, teaches, and organizes around access to education for people who are incarcerated, capital punishment, police torture, and the prison system. She teaches at a maximum-security prison and leads the Prison + Neighborhood Arts Project’s community-building efforts connecting scholars, teaching artists, and community leaders with incarcerated students.

Kim is a co-founder of the Chicago Torture Justice Memorials (CTJM), the group that initiated historic reparations legislation passed by the Chicago City Council in May 2015 for survivors tortured by Chicago Police Commander Jon Burge’s torture ring. She was a leader in the movement to end capital punishment in Illinois and nationwide and worked closely with the Death Row 10, a group of African American men who were tortured by Jon Burge’s forces and sentenced to death. She was instrumental in advocating for the successful blanket commutations of Illinois’s 167 death sentences in 2003.

Kim is co-editor of  The Long Term: Resisting Life Sentences, Working Toward Freedom  (with Erica Meiners, Audrey Petty, Jill Petty, Beth Richie, and Sarah Ross; Haymarket Books, 2018). She was a 2016 Soros Justice Fellow and is co-authoring a book about the Chicago police torture cases (with Joey Mogul,  Beacon Press). She was previously the editor of Praxis Center, an online resource and blog hosted by the Arcus Center for Social Justice Leadership at Kalamazoo College. She was also a lecturer with the Gender and Women’s Studies Program and Social Justice Initiative at the University of Illinois at Chicago. Prior to that, she served as the Director of The Public Square, a program of Illinois Humanities that created radically democratic spaces for public conversations about pressing contemporary issues.

Kim received her BA from Northwestern  University and her MFA in Writing from Bennington College.